**** The information written here is not legal advice and the author of this blog is not your lawyer.  These posts merely contain ideas to help you plan and organize your legal research and identify potentially helpful sources of law. ****

Because of their built-in requirements that people have to avoid being seen naked in public, the various lewdness, public nudity, indecent exposure, pubic urination, and obscenity statutes seem to create a guarantee of privacy for people conducting private acts in public spaces.

If people spy on someone washing himself or take pictures of somebody scratching, dressing, cuddling, etc… in a place where he expects that nobody will see him, then the surprise and offense, crucial elements of those indecent exposure laws, are now against the person performing these private functions rather than the onlooker. Just as the law protects the unsuspecting viewing public by criminalizing genital exposure, the law protects the unsuspecting naked public by criminalizing peeping toms.

Unfortunately, there is a significant limitation in most laws about peeping toms; the person being spied on has to have been inside of a building in order for the peeping tom to be criminally charged. For years legal scholars have called for new and revised privacy protections for people who are out of doors. Some have pointed out that since the body itself, not a building in which the body might be located, is in need of privacy protection, the peeping tom laws should not be limited to window peeping or building invasions of any kind.[i]

An interesting legal phenomenon has resulted with the invention of smaller and less obvious photographic equipment that makes surreptitious observation of other people’s bodies quieter, more convenient, and generally sneakier. The peeping tom laws, which are often local ordinances punishable only by fines or community service, have been supported by new state laws about voyeurism which emphasize the medium used for spying rather than the place where spying occurred as the basis for guilt. This change in statutes began in response to cases in which courts sought to punish people using up-skirt cameras to photograph under women’s skirts in malls, sports arenas, and other busy places.[ii]

California, Kansas, Louisiana, South Dakota, and other states have enacted laws in the last several years to criminalize secretly spying and recording people with cameras or video cameras in ways that are done for sexual pleasure.[iii]

Connecticut’s video voyeur law is particularly simple and, in its simplicity, offers decent protection for homeless people doing private things outside: “A person is guilty of voyeurism when, with malice or intent to arouse or satisfy the sexual desire of such person or any other person, such person knowingly photographs, films, videotapes or otherwise records the image of another person (1) without the knowledge and consent of such other person, (2) while such other person is not in plain view, and (3) under circumstances where such other person has a reasonable expectation of privacy.”[iv]

Even with this development regarding video voyeurism, municipalities and states attempting to revise their general criminal voyeurism codes so that they will apply out-of-doors run into difficulty delineating logical boundaries: Will people be at risk of criminal charges every time they look at anyone else? Will they only be charged if they look for a certain amount of time or from a particular distance?

If someone was just looking at the sunset and a person nearby takes off his clothes, might the first person be found guilty of a crime? If somebody is lost in the woods and accidentally comes upon a couple having sex, can the couple call the police? These are the kinds of questions lawmakers think of as they try to construct statutes that will protect people from being spied on in public places, but also prevent innocent folks from getting in trouble just for looking around.

Criminal harassment laws which punish “alarming conduct serving no legitimate purpose”[v] are certainly available for homeless people to assert when they complain to police about people spying on them. But, unless there has been a pattern of harassment, i.e., stalking, to the extent that the victim can accurately describe the perpetrator and give the police a prediction about when and where he will act next, there simply won’t be adequate proof to even find someone who spied on a homeless person, let alone prosecute him. So, despite the existence of harassment statutes and the video voyeurism laws, there is still a gap in legal sanctioning against people who spy on the homeless doing private functions outside. 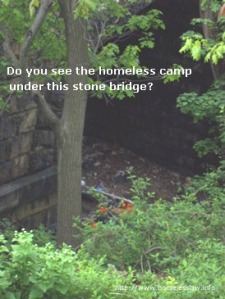 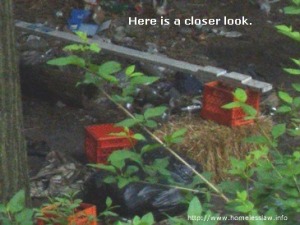 [i] See, Andrew Jay McClurg, Bringing Privacy Law out of the Closet: A Tort Theory of Liability for Intrusions in Public Places, 73 N.C.L. Rev. 989 (1995); Lance E. Rothenberg, Comment, Re-Thinking Privacy: Peeping Toms, Video Voyeurs, and Failure of the Criminal Law to Recognize a Reasonable Expectation of Privacy in the Public Space, 49 Am. U.L. Rev. 1127 (2000).

[v] Model Penal Code § 250.4.  Not every sate has adopted this part of the Model Penal Code, and those that have adopted it may have changed the wording, but it does represent the legal standard for harassment.